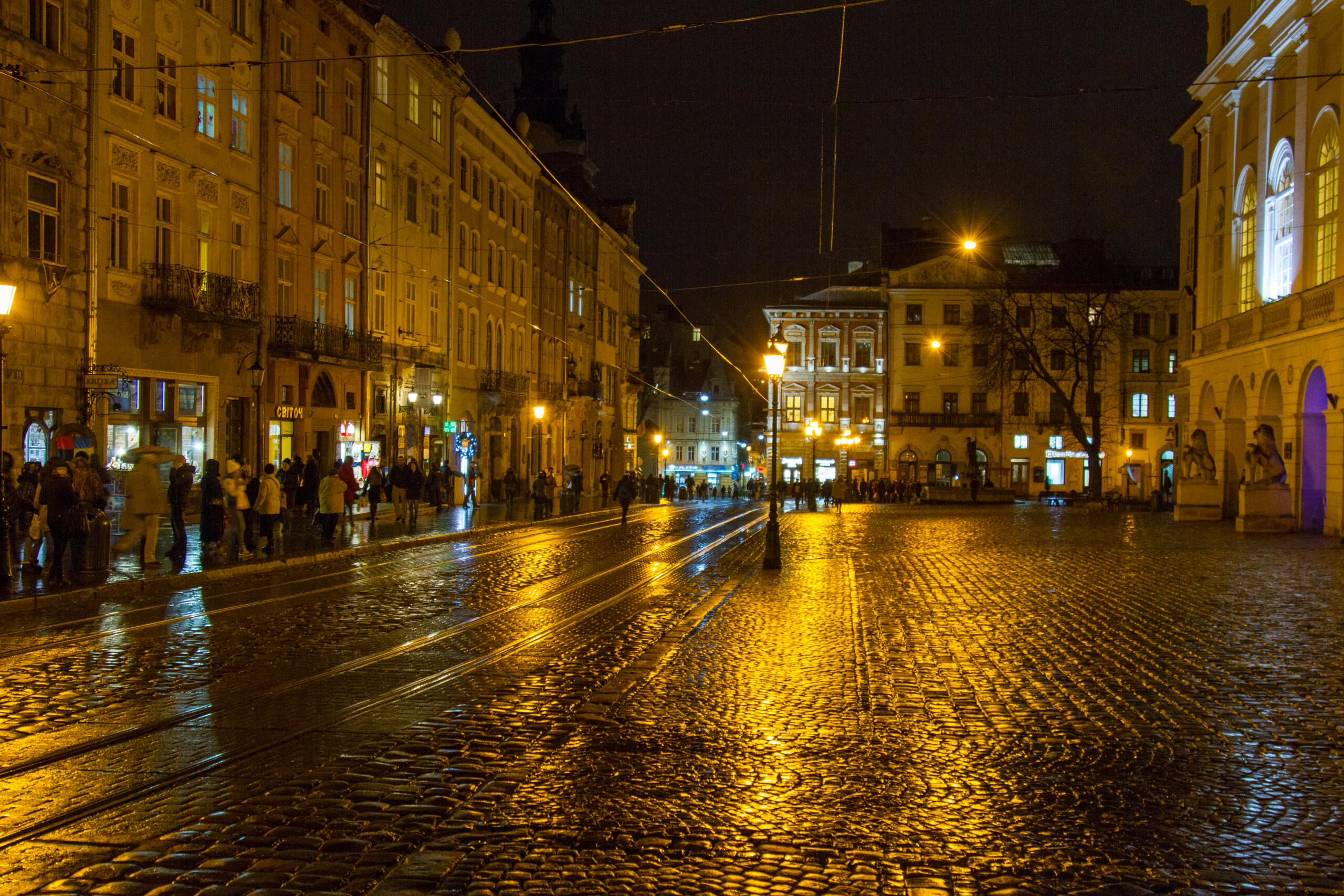 As everyone is likely aware, war broke out 12 days ago when Russia invaded Ukraine.  This aggression is the latest Russian action against Ukraine – something that started in 2014 with the annexation of Crimea and its support of an independence movement in Eastern Ukraine.  However, this current incursion, and in particular the attack on a nuclear power plant last week, have dramatically changed not only the investment landscape, but also the landscape for the world in general.

We received a rather uncomfortable report from BCA Research on Friday that provided their take on the events in Ukraine.  BCA may be pessimistic, but they assigned a small chance of this conflict escalating to a much broader and more dangerous war.  However, they also stated that this was irrelevant to how one’s portfolio should be constructed because if a nuclear bomb is headed your way, the make-up of your portfolio does not really matter.  Very distressing commentary, but also calming in a way as it guides you towards concerning yourself with the things you can control rather than worrying about the things you cannot.  In BCA’s assessment, they view stocks as being the place to be over the next year, but there will be some rough patches over the next 3 months.  (Source: BCA Research, Rising Risk Of A Nuclear Apocalypse, March 4, 2022)

Impact on the Financial Markets

If we ignore the unthinkable outlined above and focus on the financial perspective, the reaction since the invasion has been a shift to investments and locations that are viewed as being safe.  At a very high level, this means:

Change in Currency Values Relative to US Dollar 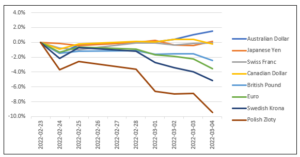 From an investment/economic perspective, the big unknown is the impact that all the sanctions that have been announced will have on investments.  Given that Russia is a large exporter of oil, natural gas, wheat, and other commodities, it is almost certain that there will be ripple effect felt around the world.  Canada is also a large exporter of these same commodities, so we will likely be somewhat shielded. On the other hand, countries that need to import these items will be much more exposed to negative effects.  Obviously, Europe is the most affected as it is the closest to Russia and has the most economic ties to it.

Impact on the Alitis Pools

Alitis’ diversified approach to investing tends to work well in these situations.  During the last major event – the initial Covid drop in 2020 – there were some declines in some investments but overall, the drawdown was limited.  This limited decline was mostly due to the diversification we employed because of the asset classes we used.  The following sections provide an overview of the expected impact on the major asset classes we use in constructing portfolios:

With respect to real estate, we expect events in the Ukraine to have little or no impact.  The vast majority of real estate exposure is in private deals that have no direct connection to the Ukraine or public markets.  At present, the only publicly-traded real estate holding is Dream Impact Trust (MPCT.UN) which represented the following exposures at the end of February:

Our mortgages investments are in a similar position as Alitis’ real estate holdings with most of the assets being private and in Canada.  Current events are expected to have little or no impact on these investments.  There is some exposure to US private mortgages but, as with Canada, events are not expected have any material impact.  Some publicly-traded mortgage investments are held, but their reaction has been mixed since the invasion – one up, one down, and one about the same.  It would appear that the publicly-traded mortgage investments are generally indifferent to the situation and they still generate a nice yield.

Publicly-Traded Mortgage Investments, Returns and Yield (as of March 4, 2022)

Fixed income has had a tough time over the last year as inflation has increased and interest rates have risen.  However in times of stress, fixed income is generally a safe haven and does well, and that is the case with events over the last week. As mentioned above, yields on US 10-Year Treasuries have dropped which has caused most bond prices to increase.  This is the reason why we like to have traditional fixed income investments in portfolios – when adverse events happen, bonds do well and provide protection for your portfolio.  If the situation in Ukraine persists, we expect bonds to continue to provide that safe haven for your portfolio.

With respect to the private debt investments we use in the Alitis Pools, they deal principally in Canada with some exposure to the US.  As such, it is not expected that these will have any material issues due to the war in Ukraine.

Obviously, publicly-traded equities are the biggest concern, as they should be when wars happen.  Generally speaking, equities have performed as follows since the invasion started:

As of Friday’s close (March 4, 2022), here is how various markets around the world have performed using country-specific ETFs as a proxy:

Performance of Selected Country-Specific ETFs (in US dollars)

Overall, Russia has obviously fared the worst with other European countries also doing poorly. (Note: after market close on Friday, trading in RSX was halted making it is essentially worthless now) It is interesting to note that four countries – Canada, US, Australia, and Brazil – have gone up over since the war started.  Our exposure to the continental European countries (Germany, Sweden, Poland) closest to Russia was a concern given the situation, so the allocation to these countries was cut by about 50% on February 15th, with the proceeds left in cash.

As for the private equity and infrastructure investments utilized by Alitis, it is expected that the impact will be minimal as, on aggregate, most of the underlying investments are in Canada and the US.

The situation in Ukraine is horrible to watch and we truly hope that this madness ends quickly.  We don’t believe that a doomsday scenario will ever come close to unfolding but unfortunately, we are likely to hear more about these potential outcomes as sensationalized news gets views and drives ratings.  All this is a regrettable byproduct of the age in which we live.

From an investment perspective, however, the Alitis Pools are positioned to ride through the turbulence relatively well.  Alitis has always focused on risk management and the use of alternative asset classes which, in our opinion, should have better risk/return outcomes. These private asset classes have allowed us to increase the diversification options available for your portfolio and should work well even in these truly uncertain times.

Opinions expressed in this article should not be relied upon as investment advice. This article does not take into account the investment objectives, risk tolerance, financial situation or specific needs of any particular person. Each person’s investment objectives, risk tolerance, financial situation and specific needs should be evaluated before making any investment decision. This article may contain economic analysis and opinions, including about future economic and financial markets performance. These are based on certain assumptions and other factors, and are subject to inherent risks and uncertainties. The actual outcome may be materially different. All opinions expressed herein constitute judgements as of the date of this article and are subject to change without notice.

Unless otherwise noted, the indicated rates of return are the historical annual compounded returns for the period indicated, including changes in security value and the reinvestment of all distributions and do not take into account income taxes payable by any securityholder that would have reduced returns. The investments are not guaranteed; their values change frequently and past performance may not be repeated.

Unless otherwise noted, risk refers to the annualized standard deviation of returns for the period indicated.

© 2022 Alitis Investment Counsel Inc. All rights reserved. Unauthorized use, distribution, duplication or disclosure, in whole or in part, or in any form or manner, without the prior written permission of Alitis is prohibited by law.

The Alitis team’s periodic communications are designed to keep you informed and help institutional investors in pursuit of their fund’s goals.

The Alitis team’s periodic communications are designed to keep investment professionals informed and help you in achieving business growth and client success.

The Alitis team’s periodic communications are designed to keep you informed and help in the pursuit of your personal financial goals.