With investing, there are many times when small adjustments prove to be significant drivers of better return. The asset class best known for a focus on the measurement of microscopic changes in value is within fixed income investing.

Durations and credit ratings are quite intuitive. In normal markets, a longer duration will command a higher premium because of the time value of money, and riskier credit ratings command a premium for the higher probability of default. Generally, investors with diversified portfolios will have some exposure across the entire spectrum of duration and credit ratings, with simple investment options available to specialize in different areas.

Convexity is not an area that is discussed widely in the media, but it plays an important role in any fixed income portfolio. The definition of convexity is, a measure of the curvature, or the degree of the curve, in the relationship between bond prices and bond yields. Convexity demonstrates how the duration of a bond changes as the interest rate changes*. 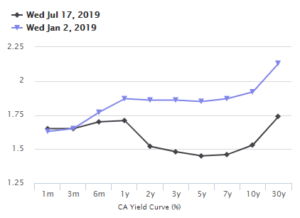 We believe that currently there is a greater benefit to holding positions in short-term and long-term maturities rather than the middle of the curve. By moving our positions to the long and short ends of the curve, it keeps our aggregate exposures quite similar, but it changes how the investments are impacted by changes in the yield curve. Movements in the yield curve are a significant driver of total returns in fixed income investing.

The yield curve does not always move proportionately across the entire curve. The relationships between different maturities along the curve can change over time as well, causing the curve to steepen, flatten or twist.

In looking at the Canadian yield curve from January 2019 compared to the middle of July 2019, you can see that yields have dropped, but have dropped the most in the middle of the curve, for maturities between three and seven years. If the size of the dip for these middle maturities decreases in the future, which we believe is more likely than the opposite, our combined position of short duration bond ETFs and long duration bond ETFs will have a higher total return than an investment with durations ending in the middle of the yield curve.

Insights is a great place to come for information on Alitis, Alternative investments, our funds and the broader market.